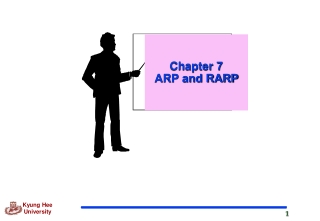 Chapter 7 ARP and RARP. Introduction. The logical addresses in TCP/IP protocol suite are IP addresses Physical address is usually implemented in hardware Ex) 48-bit MAC addresses in Ethernet and Token ring protocols, which are imprinted on the NIC installed in the host or router.

Ethernet Addresses &amp; Resolution - . a data link such as ethernet or a token ring has its own addressing scheme

ARP and RARP - The left side of this slide gives an arp message in hexadecimal format, identify the arp header fields,