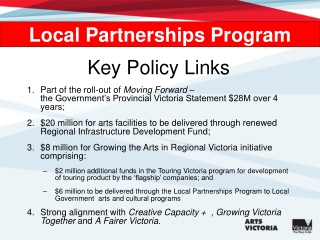 Managing the Coast - Instructions. on the following slide you will find links to pages that give you a photograph of a

Page 1 of 25 - . contents of the presentation. key components of eu groundwater and soil regulations under developments

Political Linkage: Factors Work Through These Links to Influence Political Policy - . social movements. what are social

Foreign Policy Instruments - . there are 4 fp instruments. diplomacy trade aid military power. what we are doing….

Research, Monitoring, Assessment and Policy: All Links Must be Strong Thomas Rosswall - Presentation to the

Opportunities, Links and Benefits: - The ansa network and regional institutions -perspectives from the africa policy

Useful Links - . module 10. introduction. the following resources provide links to useful information to help you and

Putting Policy into Practice - . how to develop and implement an effective rim policy. agenda. understanding what a