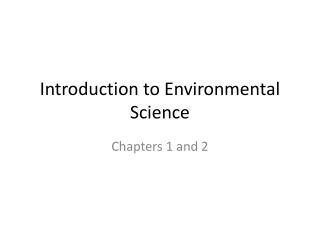 Introduction to Environmental Science. Chapters 1 and 2. We Cannot Create or Destroy Matter. Law of conservation of matter – matter cannot be created nor destroyed Matter is converted from one form to another. Everything we think we have thrown away remains here with us in some form…. An Introduction to Environmental Science Chapters 1, 2, and 3 - . check out study tips at the end of the power point.