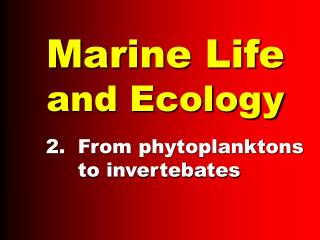 Marine Life and Ecology. 2. From phytoplanktons to invertebates. Virtually all primary productivity on land comes from large plants. … seaweeds such as these do exist, but they need shallow water where Sunlight is available and firm substrate for anchorage by their holdfasts. Marine Life and Ecology - Marine life and ecology. from basics to the extremophiles. heterotrophy. autotrophy.

Marine Ecology - . introduction. we will spend the next several lectures looking at connections between environments.

Marine Ecology and Environment - . introduction: ecology and its domain. definition and scope of ecology the word ‘

Marine Ecology 2014 - . welcome. exploring the underwater world is both fun and serious. scuba diving is enjoyed by

Marine Ecology Terms - . ecology - study of the relationships of living organisms (biota) to the environment (abiotic

Marine Ecology Terms - . ecology - study of the relationships of living organisms (biota) to the environment (abiotic or

MARINE ECOLOGY TERMS - . ecology - study of the relationship of living organisms (biota) to the environment ( abiotic or