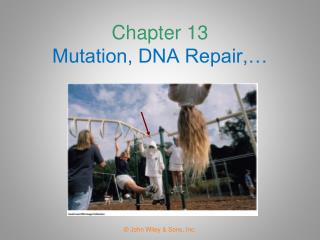 Chapter 13 Mutation, DNA Repair,…. Amino acids in polypeptides are joined by what type of bond? a) Hydrogen b) no-Peptide c) Covalent d) Ionic e) Weak. Which of the following is not a true statement about ribosomes? a) They are structured into large and small subunits DNA Repair &amp; Recombination - . all 3 genomes in plants constantly being damaged by uv and other forms of

Mutations, Mutagenesis, and Repair - . chapter 10 . the problem. dna extremely long, fragile subject to both physical and

CHAPTER 10 Bacterial Genetics - . mutation and recombination, mutations and mutants. mutation is a heritable change in

Chapter 12 Molecular Mechanisms of Mutation and DNA Repair - . mutations . a mutation is any heritable change in the

Chapter 7: DNA Repair Pathways - . we totally missed the possible role of enzymes in dna repair…. i later came to