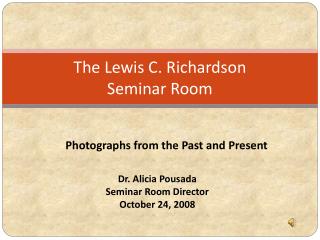 C. Day-Lewis - . a poet and author. history and brief biography. cecil day-lewis was an anglo-irish poet, critic, and

Richardson - R. richardson. j. journey. t. to. s. success. what is rjts?. rjts, richardson journey to success is a whole

C. S. Lewis on the Objectivity of Value - . i. what is the tao? ii. critique of the subjective theory of value iii.