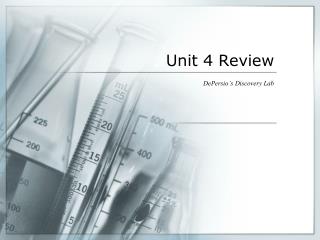 Unit 4 Review - . write five open-ended questions—that means that the answer is not a simple “yes” or “no” but

Unit 4 Review - . cellular respiration &amp; human systems. 1. this is where glycolysis occurs. a. matrix of the

Unit 4 Review - . chinese exclusion act. passed in 1882 prohibited immigrants from china was passed because of

Unit 4 Review - . main idea america faced a series of changes during the period of 1820-1860. the spirit of change was

Unit 4 Review - . answers. decline. to diminish or lessen; to get worse. nomad. a person that does not have a permanent

Unit 4 Review - . terms to remember. precision: the narrowness of a range of numbers accuracy: how close a measurement is

Unit 4 Review - . 1. biological communities change because  limiting factors cause them to reach their carrying

UNIT 4 REVIEW - . weather. true or false the atmosphere is a thin blanket of air that surrounds the earth. true false.

Unit 4 Review - . kinematics. kinematics. when air resistance is not taken into consideration, released objects will

Unit 4 review - . pay attention, the test is tomorrow, these questions might be on the test. do your best. energy from