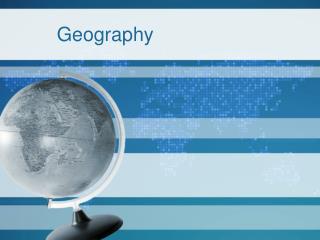 Geography. Why Study Geography?. http://www.hark.com/clips/hwtpzdyvns-i-have-no-clue. What is Geography?. Geography - study of the earth and its features, including human life and the effects of human activity. Two main types: 1) Physical Geography 2) Human Geography. GEOGRAPHY - . terms. one of five major bodies of salt water that surround the continents. ocean.

Geography - . questions geographers ask. location- where is it? what is its absolute location? what is its relative

Geography - . sswg4 the student will describe the interaction of physical and human systems that have shaped contemporary

Geography - . what is a metropolis ?. definition (for your notes). a metropolis is a very large city or urban area that

Geography - . basic knowledge &amp; tools . what is geography?. geography - the study of the earth and everything on