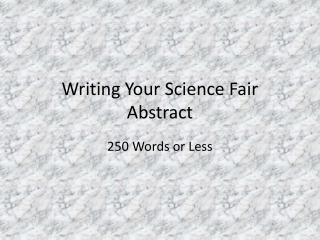 Writing Your Science Fair Abstract. 250 Words or Less. The Abstract Should Be:. A short summary of your complete work (250 words or less) It should be written in 3 rd person It should include: Your problem statement Procedure/Methods Results Conclusion/Further Implications. How to Write a Science Fair Abstract - . what is an abstract and what are its parts? . what is

Abstract writing - . what does it look like?. roughly 200-300 words in length in full sentences , not just ‘bullet

Science Fair - Guidelines. all projects must use the scientific method with each part labeled.all must be experiments -

SCIENCE FAIR - . how to develop a successful project. topic. how the growth of marigolds are affected by temperature

Science Fair - . data, data, everywhere. &quot;discovery consists of seeing what everybody has seen and thinking what

Science Fair - . why?. the science fair has many benefits: application of the scientific method research data collection

Science Fair - . the ins and outs and dos and don’ts. why do one?. discovering something amazing developing skills cash

Science Fair - . "discovery consists of seeing what everybody has seen and thinking what nobody has thought."-

Science Fair - Title. catches attentionis relevant to the project. example:it's not easy being green. problem. what are

SCIENCE FAIR - . 2013. main objectives of having a science fair. to encourage students to become actively involved and