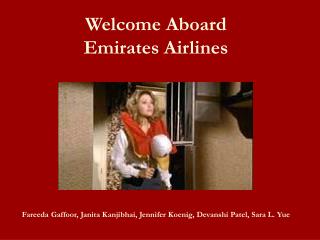 Welcome Aboard! - . denbigh high school aviation academy. where are we?. who are we?. magnet program of denbigh high

WELCOME ABOARD! - The ecosystems surveys branch would like to welcome to our cruise program. this cd is designed for

FACOB AIRLINES WELCOMES YOU ABOARD - . a one and a half hour interactive flight. faculty of business facob learning and

Welcome Aboard – Chapter 1 - . comp 2610. how we will get there. computer: electronic genius? no! electronic idiot!

Chapter 1 Welcome Aboard - . introduction to the world of computing. computer: electronic genius? no! electronic