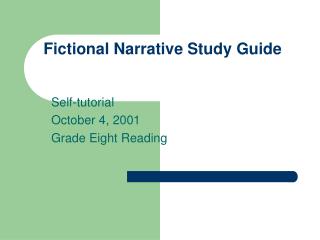 Fictional Languages - . the difference between fictional and constructed

Fictional Text - . what makes a good story? . what do you need for summer school?. an attitude conducive to a good work

Fictional detectives - . look at our powerpoint to find out about different detective. hercules poirot. poirot was

Study Guide - 1. explain the role religion played in the life of the ancient greeks. how did their polytheistic

Study Guide - . chapter 4. the sons of liberty dumped 342 chests of tea into boston harbor to protest the tea act.

Study Guide! - . a court system made up of both federal and state courts- dual court system. authority of both state and