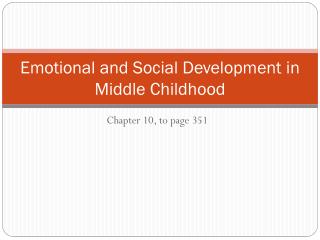 Chapter 10 - . socio-emotional development in middle and late childhood. the self. the development of self-understanding

WELCOME! Please complete the “Reflection on Concerns and Vision” Questionnaire Before the session begins. Thank

Poverty, Prisons, and Social Development - . excerpts from the second edition of dignity of the individual international