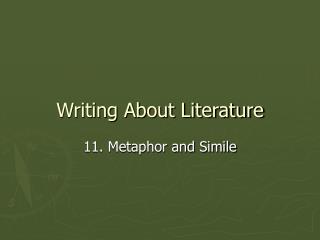 Writing About Literature. 11. Metaphor and Simile. Metaphor. A comparison between two distinctly different things that actually have at least one thing in common. Examples: What’s the Turkish Literature ? - -literature is a telling style.can be called telling your emotions strongly. . about

SOURCES OF ANCIENT INDIAN HISTORY - Introduction- sources are essential for writing the history of ancient india. the

Prompt Attention: Writing about Literature from Topic to Thesis - . consuming and producing: essay prompts for

WRITING WORKSHOP - . by: ms. m. menendez edited and expanded by: mrs. a. guerra. “here’s the secret to writing: there