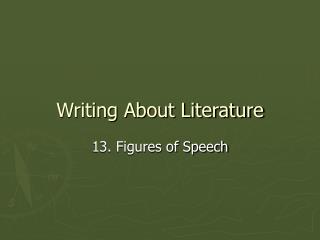 Writing About Literature. 13. Figures of Speech. Definition. A figure of speech is the use of words that diverge from their literal meaning The figurative meaning may be achieved through special repetition arrangement or omission of words How to do a literature search - . saharuddin ahmad aida jaffar department of family medicine. outline. the role of the