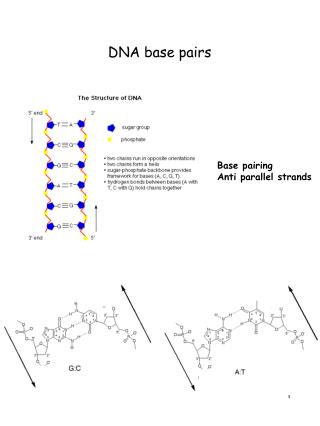 Model of DNA DNA is Comprised of Four Base Pairs - . dna restriction enzymes. • evolved by bacteria to protect against

DNA Forensics Lab – background DNA A. Human genome contains 3 billion base pairs - B. human dna is about 99.9% the

Can RNA form base pairs? - . yes, in many circumstances some are strictly dsrna molecules, others are folded back pieces

Number of base pairs in humans - . what is 3.2 billion?. making trna from mrna. what is translation?. we described the

Counting the maximum number of base pairs - . but how to count? an rna could be very long; there may be many possible

Molecular base of Inheritance DNA - . premedical - biology. proof that dna is carrier of genetic information - 1928.