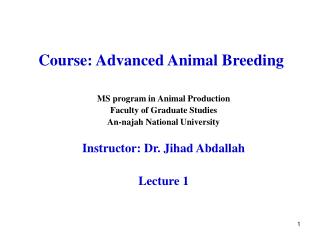 Nutrient and Feed Requirements - . what affects an animal’s nutritional requirements?. the specific animal and their

DAIRY CATTLE BREEDING AND SELECTION - I. introduction to breeding livestock. a. history of livestock breeding of all four

“Breeding systems and their genetic basis to improve quality and production of animals” - . chris moran professor of

EBV’S - . estimated breeding values. what is an ebv?. it is a genetic prediction of the average performance of an

Animal Reproduction and Genetics - . terminology. castration removing the testicles of the male to prevent breeding