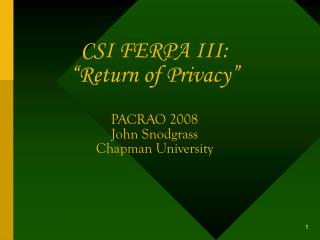 CSI FERPA III: “Return of Privacy” PACRAO 2008 John Snodgrass Chapman University. Collecting the Evidence, , ,. Educational Record: covered by FERPA? Student: does FERPA apply? Access: signature required? copy required? Immediate? Must vs May: do I have to?

John Farley, Executive Director The Energy Council of Rhode Island April 2, 2008 - The role of energy in the rhode island

Chapter 14 - . risk, return, and the time value of money. relationship between risk and return. return – profit as a