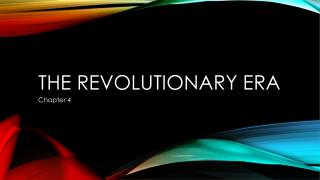 The Revolutionary Era. Chapter 4. War and Diplomacy. The 18 th century was an interesting juxtaposition of the Enlightenment (seeking to make a better society) and intense rivalry/competition between European nations.

Rubbish Bin Hire - Dial a tip stocks skip bins in numerous sizes to provide on rent. we have developed a revolutionary

Fall Final Review - . question. what is the treaty ending the revolutionary war, confirming the independence of the us

The first duty of a revolutionary is to get away with it. Jerry Rubin - Where have we been? where are we going? how

The Louisiana Purchase - . eq: what was the importance of the purchase and exploration of the louisiana territory?. the

Growth, Expansion &amp; Native American Removal - . chapter 9 and 10. question. after the revolutionary war why did

Road to the Revolutionary War - . question #1. what was beginning to happen towards the end of the last chapter?.

THE AGE OF REASON - . the revolutionary period. science in the new world. the invasion of smallpox cotton mather, the