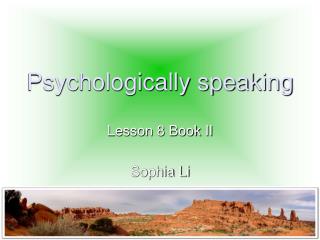 A Debate: Believing in God is Psychologically Healthy - . daniel, annie, chase, and john. aka group 5. the “not”

Chapter 12: Helping the Injured Athlete Psychologically - . an athlete’s mind is also affected when the body is injured

SPEAKING - . talk about the following topics. speaking. what can you tell us about turkey? location geography (lakes,

SPEAKING - . contents. inviting refusing accepting exercises. inviting. can you come to a barbecue? do come to the

SPEAKING - . describing pictures. 1.general topic. all these pictures show … this set of pictures shows … here we

Lesson 8 Psychologically Speaking - . introduction to the text. 1. situational comedy: feature: 1) it does not have a

SPEAKING - . content. warm-up answer following questions how many children do your parents have? do you want to have more

SPEAKING - . unit 11: sources of energy. warm up. work in pairs and deal with a list of a jumbled words. belaviaal

SPEAKING - Unit 3: ways of socializing. speaking. giving and responsing to complimemt. pre - speaking. ways to give and