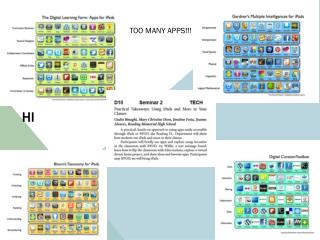 TOO MANY APPS!!!. HI. APPS. How to find apps?. You can choose your own categories; Zite gives you articles. Try “Apps for education”, for starters. Go to the App Store and search!. Convert websites to android mobile apps for free using android studio - Welcome to our school! we want you to be able

Most Innovative Uses of Virtual Reality with Oculus apps

Google Apps for Education - . wcps summer institute 2011. we all know google…. as a search engine …. but google apps