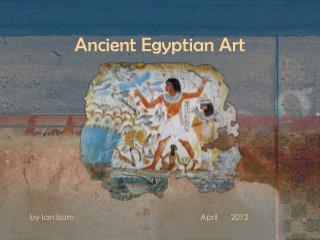 Ancient Egyptian Art. by Ian Isom. April 2012. What can you tell me about this Mask?. Objectives. Identify the three major periods of Egyptian history. Analyze the role that religion played in the development of art and architecture.

Egyptian Art - . by: kevin and ethan. pyramids. these mountain like structures were built for pharaohs. these were also

Egyptian Art - . paintings. use frontalism- head in profile, eyes look out, body from front, feet point with head nothing

Egyptian Art - . circa 3,000-1,000 bcor bce. egyptian art. hieroglyphics were pictures used as a written language. in

Ancient Egyptian Art - . by ian isom. april 2012. what can you tell me about this mask?. objectives. identify the three

Egyptian Art - . by: o livia ueltschi. the egyptian style art was very representational. they had 6 types of main art,

Prehistoric , Ancient Art and Egyptian, Classical - . senior exam 2012 visual art one. 44. this is an example of

ANCIENT EGYPTIAN - . law &amp; order. everyone had to follow ancient egyptian law and was regarded as equals except

Egyptian Art - . style. the definition of style when used in art is: an artwork, artist, or movement that follows a

Egyptian Art - . ancient egyptians were a people who believed in many gods. these gods were manifest in every aspect of

Prehistoric , Ancient Art and Egyptian, Classical, and Medieval Art - . senior exam 2012 visual art one. this is an

Ancient Egyptian Art - . the art of the ancient egyptians is about 5000 years old and developed between 3000bc and