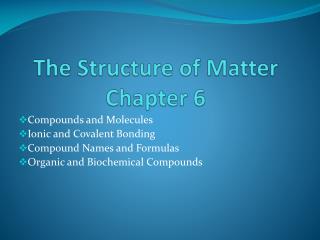 The Structure of Matter Chapter 6 The Structure of Matter Chapter 6

Chapter 9 Molecular Structure - . under what rules do atoms form

Science Module - . 8 th grade. taks objective 3 . the student will demonstrate an understanding of the structure and