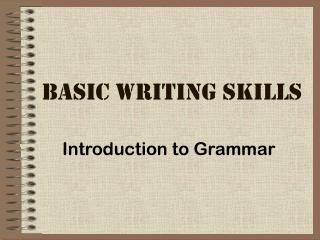 BASIC WRITING SKILLS. Introduction to Grammar. Why is Grammar Important?. Unit 9 - . the ones who walk away from omelas by ursula le guin. teaching aims. 1. improving reading skills 2. enriching

Grant Writing Basics - . a presentation on the basic elements of grant proposal writing and an overview on how to find

Research skills for your EPQ - . where to begin. choosing a subject. choose a broad subject area and carry out some basic

202: The Ansell Casey Life Skills Assessment - . learning objectives. examine the basic history and development of the