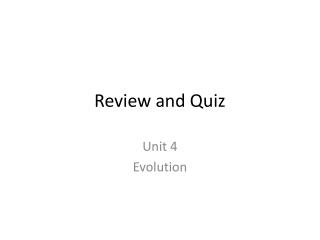 Review and Quiz. Unit 4 Evolution. 1. What are the 4 requirements for Natural selection?

Review Quiz… - . on a clean sheet of loose leaf paper. 1. write down the type of internal force that is happening. b.

Review for Quiz - . ratio, rates, proportions and percents. find the constant proportionality of this graph. write the

POROSITY AND PERMEABILITY Review and Quiz - . water drains downward through the unsaturated zone due to gravity. the

Review Quiz on Sections 1-3 - . industrial revolution. what is a patent?. a document that gave new immigrants jobs,

Quiz Review - . find the scale factor of figure a to figure b. if triangle pqr ~ to triangle stu, then find all possible

Quiz Review - . the good students will take copious notes. the topics you need to study. unit conversions one dimensional

REVIEW FOR THE QUIZ - . please write the answers down as we go through the questions. please get everything off your desk

Review for quiz - . a. f. d. compare and contrast incenter and circumcenter name the point that circumscribes triangle

PTCE Quiz 6 Review - . pharmacy tech program. how many days will it take a patient injecting 23 units of humulin r