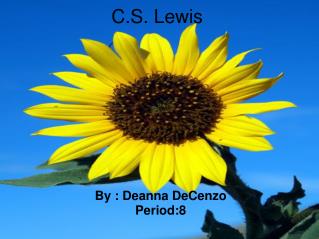 C.S. Lewis - . “there is, to be sure, one glaringly obvious ground for denying that any moral purpose at all is

C.S. Lewis’ Case for Christ - . mere theology (by will vaus) case for christ (by art lindsley) mere christianity (by

The Voyage of the Dawn Treader Author: C.S. Lewis Retold by: Jessica Branks - . in a land called narnia there was a man