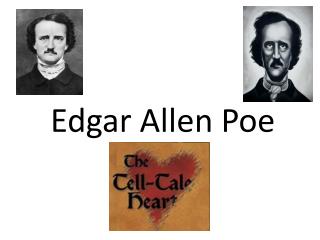 Edgar Allen Poe. Edgar Allan Poe (January 19, 1809 – October 7, 1849) was an American writer, poet, editor and literary critic. Best known for his gruesome tales and mysteries, Poe was one of the earliest American writers of the short story .

Bringing Value to the Table Without Ending Up on the Menu - . r. allen coffman, m.d., f.a.a.p. president tn chapter of

The Fall of the House of Usher - . edgar allan poe. poe as gothic writer. he sought to examine the emotional side of the

Tension in Poetry By Allen Tate Seminar Presented by: Haider Jabr Mihsin - . allen tate . allen tate (1899- )is one of

Lesson 5 Verbals - Verbals look like verbs. in fact, a verbal is a verb form, but it serves as another part of

Edgar Allen Poe - . by kaleb pitchford. birth. edgar poe was born in boston on january 19, 1809. he is capricorn his

Edgar Allan Poe - . “never to suffer would never to have been blessed.” edgar allan poe. presented by: olivia

Edgar Allan Poe - Contributing to the genres of horror and science fiction, poe is considered as the father of the modern

Edgar Allan Poe - . an unhappy childhood. poe was born on january 19, 1809. edgar allan poe, was the son of actress eliza

An Introduction to Edgar Allan Poe including: “The Cask of Amontillado” and “The Tell-Tale Heart” - . edgar allan