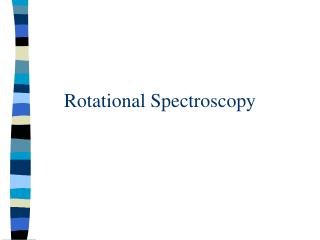 Rotational Spectroscopy. To a stationary observer, a rotating polar molecule looks like an oscillating dipole which can stir the electromagnetic field into oscillation. This picture is the classical origin of the gross selection rule for rotational transitions. Rotational Spectroscopy of Linear Molecules - This is the far infra red spectrum of the diatomic molecule co. it is due

rOTATIONAL MOTION - . what is rotational motion?. what does a yo-yo have in common with a merry-go-round?. how can we