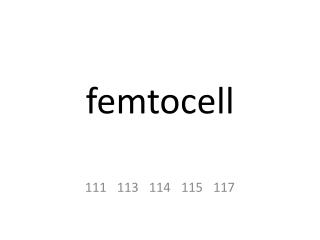 femtocell. 111 113 114 115 117. Femtocell Definition. A small cellular base station, designed for use in residential or enterprise. Connects to the service provider’s network via broadband . Support 2 to 5 mobile . Allows service providers to extend service coverage indoors . Global femtocell market - Is segmented by technology, applications, and region. in terms of technology, the femtocell

PICOCELL AND FEMTOCELL MARKET - Less power consumption is the major factor, which is expected to drive growth of the