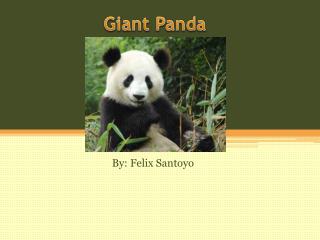 Giant Panda . By: Felix Santoyo. Giant Panda’s Habitat. The Giant Panda has it’s habitat in bamboo forests, high elevation in the mountains. Located in Western China. There are around 720 panda’s in the Minshan Mountains, which is 45% of the wild population. Giant Panda - . arianna g. habitat. the giant panda lives in central china. they sleep at the bottom of trees under

Giant panda - . a scientific presentation by emma, amelia and nikita!. where they

Giant panda - . ashlee roundy. habatat. giant pandas live in a board leaf and coniferous forests with a dense under

Giant Panda - . are you getting my good side?. home, sweet home. i love to climb trees!. yummy…bamboo, my favorite!.

Giant Panda - . by: paige elizabeth gambell. the reason i chose them. i chose giant pandas because they are endangered

giant panda - . natalie. what does it look like. blak and wilke pandas look like a bar they are covered in fur. what grop

The Giant Panda - . els reuvekamp. what is a panda?. a black and white bear large lives in china distinct black spots on

Giant Panda VPN - . a vpn service for australianâ€™s doing business travel in china. why. people i want to speak to.

Giant Panda Facts - . by jayden. hello friends! did you know that pandas live in forests in china. they eat bamboo too.

The Giant Panda - . by:austin cook and payden schrag. to start with some info. scientific name-ailuropoda melanoleuca