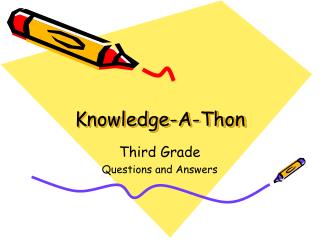 Skate-A-thon - . by: chanessa stanley. goals and objectives of skate-a-thon. goals: to raise money for pathways to

ROCK-A-THON - . 2014. what is the rock-a-thon?. it is a fundraiser to help us raise money for instruments, equipment,

Bink-A-Thon!!! - . what is a bink-a-thon?. bink-a-thon is an event where volunteers gather to make binkies to be donated

ROCK-A-THON - . 2014. what is the rock-a-thon?. it is a fundraiser to help us raise money for instruments, equipment,

Organizing a Bowl-A-Thon - . fundraiser. why a bowl-a-thon?. a bowl-a-thon is a fun way to raise money for your

MS Read-A-Thon - . w hat is ms?. multiple = sclerosis =. many scars. what is ms?. 3 differences between our scars and

Poetry Read-a-Thon - . honoring national poetry month: reading and writing poems. how can i respond to a poem?. reflect

IHE Connect-a-thon - . one of the main three activities of ihe beside the continuing update of the technical framework