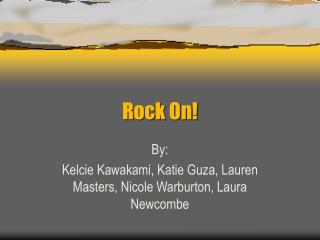 STANDING ON THE SOLID ROCK - . a pedagogical approach for the inclusion of female chest voice in the studio dr. kristen

Geology Rock, Rock On - . part 1 age of earth and scientific classification part 2 plate tectonics. how old is the

Geology Rock, Rock On - . part 1 age of earth and scientific classification part 2 plate tectonics and water. how to take

Rock On - . by exavior brothers. what types of rocks are there. metamorphic , are formed by great heat and pressure .

Rock! - Rocks. rock!. if you think rocks are boring. think again!. rocks are all around us!. have you ever wondered where

Building on a Rock - . meeting the challenges of a changing economic environment. the current economic crisis. bay area