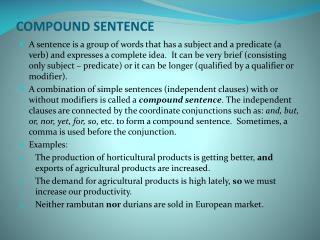 COMPOUND SENTENCE. A sentence is a group of words that has a subject and a predicate (a verb) and expresses a complete idea. It can be very brief (consisting only subject – predicate) or it can be longer (qualified by a qualifier or modifier ). The Compound Sentence - . a compound sentence consists of two sentences joined together by fanboys ( f or, a nd, n or, b

The Compound-Complex Sentence - What is it? break it down. what's a compound sentence?~contains two or more independent

Simple, Compound, and Complex Sentence - . a simple sentence has only one independent clause that states only one

Compound – Complex Sentence with an Appositive - . - must have one of these sentences on your allusion card. example 1:

Harcourt 10-11 Lesson 7 Grammar Day 1 Compound Sentence - . the big question:. how can i write a sentence with a compound

Compound - . compounds are at least 2 elements in a definite (fixed) amount. reaction. a reaction is when reactants comes