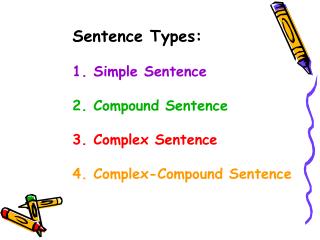 Skills for life - . making sentences how to make our writing more interesting!. there are three types of sentences. a

Sentence Types - . exercise 2. compound or complex?. the glittering elizabethan court was a focus of poetic creativity;

Thursday Review: What are the three sentence structures covered so far this week? - . sentence constructions: simple

The Compound Sentence - . a compound sentence consists of two sentences joined together by fanboys ( f or, a nd, n or, b

Sentence Types - . what makes a sentence a sentence?. subject + verb (predicate) sentences do not begin with a

Types of Sentence Structure Quiz - . simple, compound, complex, or compound-complex which is which?. simple sentence.