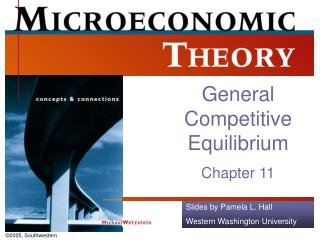 General Competitive Equilibrium. Chapter 11. Introduction. In general, changes in one market will affect demand and supply in other markets General-equilibrium analysis Study of how demand and supply conditions interact in a number of markets and determine prices of many commodities

Chapter 4 Chemical Equilibrium - . dynamical equilibrium. concept introduced by a. w. williamson in 1851 during a study

Acid-Base Equilibrium - . what you’ll see. tie together concepts of acids and bases and equilibrium weak acids and

Chemical Equilibrium - . the reversibility of reactions. equilibrium. many chemical reactions do not go to completion.

Figures and Tables - . chapter 2 equilibrium and efficiency. figures and tables. an edgeworth box. preferences and

Chapter Thirty-Two - . production. exchange economies (revisited). no production, only endowments, so no description of