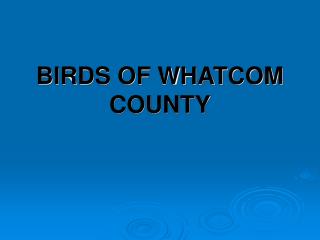 BIRDS OF WHATCOM COUNTY. Bald Eagle. Adults have black bodies and white heads Juveniles do not have the white heads and other adult characteristics, it takes up to four years for color to change Fish are common prey, but eagles will eat other meat including dead animals. Red-tailed Hawk. Backyard Birds of Sumter County - . so, what do you need?. alabama birds. checklist of alabama birds - geographical

Deaf community of whatcom county: services and advocacy - . by jill toronchuk and molly riegel. who are the deaf?. causes