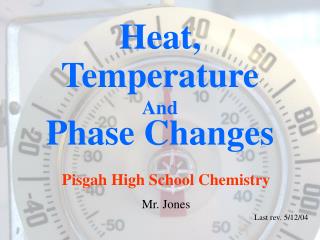 Heat, Temperature And Phase Changes. Pisgah High School Chemistry. Mr. Jones. Last rev. 5/12/04. Part One Heat and Temperature. What temperature does the thermometer indicate?. What might be going on that would cause this temperature?. Behavior Based Safety (rev. 8/04) - . what is behavior-based safety?. focuses on at-risk behaviors that can lead to

Rev 2:4-5 - . “but i have this against you, that you have left your first love. remember therefore from where you

IDX Xeptors Training Presentation Rev. 11/04 - . its all about security: crossplay counterfeits. what is this training

Endocrine System (rev 5-10) - . the endocrine system is a collection of specialized cells, tissues and glands that