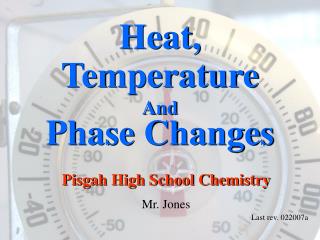 Heat, Temperature And Phase Changes. Pisgah High School Chemistry. Mr. Jones. Last rev. 022007a. Part One Heat and Temperature. What temperature does the thermometer indicate?. What might be going on that would cause this temperature?.