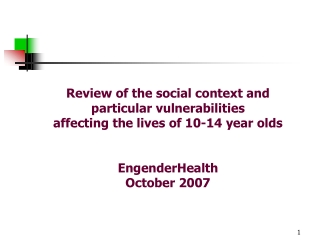 Review of the social context and particular vulnerabilities affecting the lives of 10-14 year olds EngenderHealth October 2007. Vulnerability of Adolescents …. Young people make up a large and critical demographic group in Ethiopia. 60% of the country’s 77 million are under the age of 24 Conducting an Institutional disaster vulnerability assessment - Outline of presentation. a participatory session on how

Climate Change Vulnerability: An Overview - Outline. concepts matter: where you start determines where you end uplinking