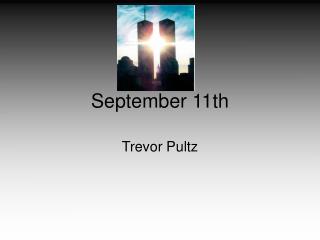 September 11th. Trevor Pultz. Introduction. September 11 th 2001 was a horrible day for all Americans. Two of the World Trade Centers (also known as the Twin Towers) were suicide attacked by Al’Qaeda In total 2,993 people, including the hijackers, died in the attacks. Secure & Safe. September 11th - . information. 9/11 was one of the most pivotal events in world history. its impact will be felt for

September 11th, 2001 - . who carried out the attacks. 19 members of the al qaeda network were responsible for planning

Remembering September 11th - . honoring our heroes and our country…. tributes to

September 11th - 13th • 2014 - . join us for the most unforgettable forum destinations ever,the land of enchantment.

September 11th, 2001 The shadows in the history - . this is the inquiry committee. in 2004 they presented their final

November 11th : - . &quot;omg! i have a phone interview with the abc company – i need to find out everything i can

Geographies of September 11th : How has the world changed? - . before and after. view from space. ground zero.

Geographies of September 11th : How has the world changed? - Before and after view from space ground zero locale :