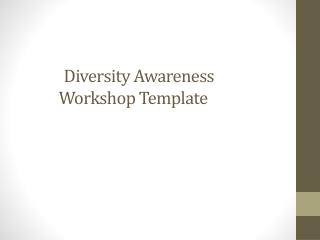 Diversity Awareness Workshop Template. Acknowledgements. This diversity awareness workshop was developed by IBEC with funding received from the Office of the Minister for Integration and the Equality Authority. Diversity workshop - . exploration of how/whether factors of class, race, gender can be used to identify students who may

Diversity Awareness and Respect - . walk in someone else’s shoes !. exercise …. on a piece of paper, answer the

AGE DIVERSITY AWARENESS SESSION - . steve baldwin. ever been too young? are you now too old? ageism matters age

Action Workshop Template - Book tool. action workshop template. how hard is it to be your customer? using journey mapping

Phonetic Awareness Workshop - . what exactly is phonics? plain and simple phonics is the relationship between letters and

Mentoring Awareness Workshop - . facilitated by bob garvey. values and mentoring. what are your organisation’s values?

Equality and Diversity: Disability Awareness - . learning difficulties. aims of session. what are learning