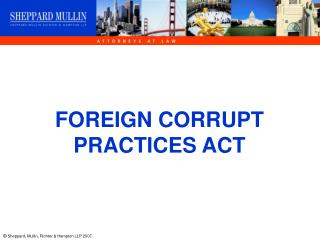 FOREIGN CORRUPT PRACTICES ACT. WHAT IS THE FCPA?. 1. A Federal Law that: Prohibits the offer or payment of anything of value to “foreign officials” to “obtain or retain business” Imposes certain recordkeeping requirements on issuers and subsidiaries: Foreign Corrupt Practices Act and the OECD - . jina yu us global trade dr. malawer. overview. the fcpa of 1977 was

An Overview of the Foreign Corrupt Practices Act - . presentation to: ninth annual pharmaceutical regulatory and

Ten Things That Everybody Knows About The Foreign Corrupt Practices Act ― And That Aren’t So! - Simeon m. kriesberg

AN OVERVIEW OF THE CORRUPT PRACTICES AND OTHER RELATE OFFENCES ACT, 2000 - . a

INVESTIGATION OF GRAFT AND CORRUPT PRACTICES CASES - . 1. preliminary statement. in the investigation of graft and

Foreign Contribution Regulation Act - The ngos can not take foreign contribution straight. for this purpose they should