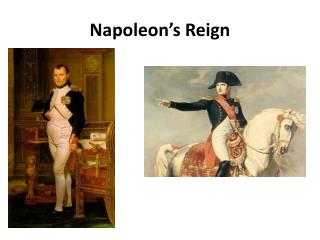 Napoleon’s Reign. “ The Revolution is over . . . I am the Revolution.”. What does the quote mean? What does it reveal about Napoleon?. Think About This Quote---After We Are Done I Will Ask You If You Agree---Why or Why Not?. The papacy of Pope Francis - Highlights from pope francis'

AP EURO: REVIEW SHEET FOR THE MIDTERM ON THE 19 TH CENTURY - . from napoleon to the road to ww i. napoleon bonaparte. i

Justinian and the Byzantine Empire - . sswh4 analyze the importance of justinian; include the influence of the empress

Bless Your Name - . in awe we stand before your throne your majesty displayed your wondrous works proclaim your power to

1750-1914 Part II - . napoleon promoted all the following reforms in europe except. a) constitutional change b) social