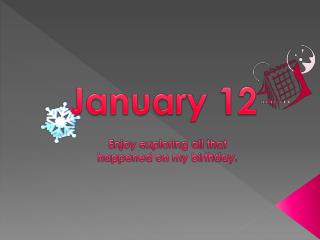 January 12. Enjoy exploring all that happened on my birthday. We could have been twins…. Significant people who share my birthday. Jan Baptista van Helmont …. Born: January 12, 1580 Who: A Flemish chemist and physician Significance: Developed the concept of gas Tuesday, January 12 - . agenda. writing prompt. why are boys and girls different (beyond the obvious physical

January 12, 2009 - Voyagers in the heliosheath kauai, hawaii. the ibex hi sensor: detecting enas from the outer

January 12, 2011 - . warmup :. fill in table comparing mitosis and meiosis on back, draw picture and write a short

January 12, 2011 - Shrm poll: recruiting veterans with disabilities: perceptions in the workplace in collaboration with

12 January 2012 - Energy service companies. . ..escos and epcs, past, present and future presented by charles ogilvie and