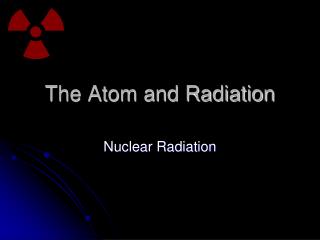 The Atom and Radiation The Atom and Radiation

ONLINE self-study - . radiation safety for ancillary employees. in this course, you will learn about:. radioactivity and

RADIATION - 1. 2. 3. radiation. energy in the form of particles or electro-magnetic waves emitted from the nuclei of

THERMAL RADIATION - . definition of thermal radiation. this is how heat energy moves from a hot to cold region by means

Radiation - . what is radiation?. radiation is the emission of energy in the form of waves or particles radiation that is

Radiation - What makes something radioactive?. the nucleus of an atom contains protons and neutronsthey are packed