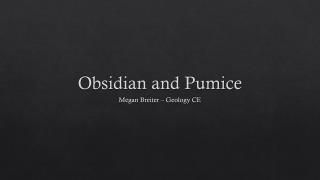 Obsidian and Pumice. Megan Breiter – Geology CE. Definition of Obsidian. Obsidian is an extrusive igneous rock formed by the rapid cooling of high-silica lava floes. It possesses a glassy look and texture with an extremely dark black color similar to basalts while being a felsic-type rock. What is Pumice? - Pumice is also known as &quot;the floating rock&quot; because of its light weight and agility

Pumice Stone | Callus Remover | UNNICK - For your feet, focus your attention on your heels, the sides of your toes, and

Black Obsidian Slabs Divya Gem Stonex - Http://www.semipreciousstoneslabs.com/black-obsidian-slab/ we have this