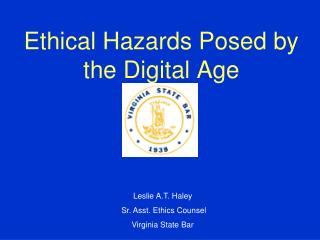 The Dilemma Posed by Scarcity - . scarcity is a fact of life. while people’s desire for goods and services is

The Dilemma Posed by Scarcity - . scarcity is a fact of life. while people’s desire for goods and services is

Climate Challenges Posed by the Economic Crisis - Towards a global green new deal? the impact of the global economic

in the Digital Age - Writing 2.0. in the digital age. i teach. what's your super power?. pam rowland 7 th grade social

In the Digital Age…. - In the digital age…. can government pass and implement legislature protecting the right to

Ethical Dimensions of Coastal Hazards Management - . what are ethics?. a branch of philosophy dealing with right and

Hazards by class - . b ases. precautions: wear gloves protect metals (cover with plastic ) wipe off seal after each use

Branding in the Digital Age - . presented by: dianne hanlon druyff executive director, strategic services ksv. what is a

Teaching in the Digital Age - . by: gena montgomery and dawn walker. 21 st century skills. don’t forget: you can

Marketing in the Digital Age - . chapter 3. objectives. be able to identify the major forces shaping the digital age.