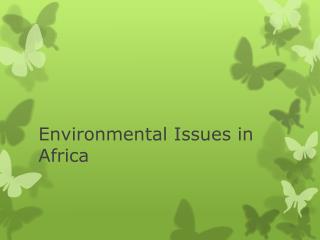 Environmental Issues in Africa. The Problems. Africans face many different types of environmental issues. Some of them are lack of water, poor soil quality, and expanding deserts. Much of Africa has trouble having enough water for people to live.

Africa - . the beginning. africa is one of the earth’s seven continents. it is the second largest continent. africa is

Features of Africa - . complete this statement … “africa’s physical geography is”…. how large is africa?. 4 6 0

Africa SS7G2 – discuss environmental issues across the continent of Africa - . 38. what is one of the major problems