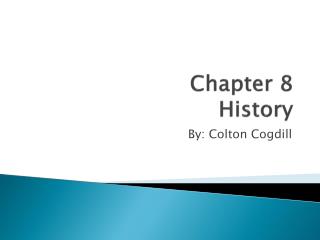 Chapter 8 History. By: Colton Cogdill. Cycladic Culture. The Cyclades are located east of the Greek main lands. All that is know about the Cyclades is from studying artifacts. The Cyclades made most of their living from fishing and trading. History chapter 8 - . by: shay huether. all of the cultures. the cycladic culture they didn’t know much about them.

Chapter 8 History - . by: bradey wolken . the cycladic, minoan, mycenaean, and trojan cultures. the cycladic are group of

Georgia History Chapter 8 - . the american revolution and georgia statehood. life after the french-indian

American History Chapter 8 quiz 2 review - . the united states broke the treaty of alliance with france because the