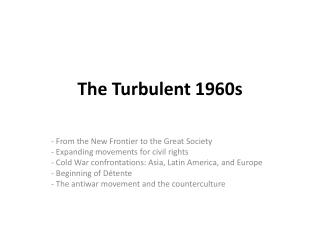 The Turbulent 1960s. - From the New Frontier to the Great Society - Expanding movements for civil rights - Cold War confrontations: Asia, Latin America, and Europe - Beginning of Détente - The antiwar movement and the counterculture. Introduction. The 1960s - . josh strobel sean donelan connor sobraske. government. the government of the 1960s was chaotic in many

The 1960s - . the student movement. roots of student activism. many of the first students involved were inspired by the

The 1960s - . by: willow foster fpd. political issues/political leaders. in the 1960s our president was john f. kennedy

The 1960s - . class 1. administrative. reading for next time – teacher unionism and cesar chavez. review. merger of the

The 1960s - . the baby boomers. 70 million post-war babies became teenagers movement away from the conservative fifties