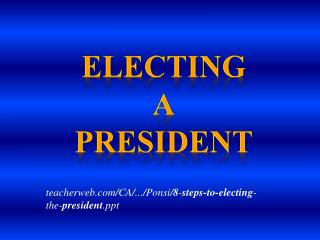 Inside America's prisons - A look inside u.s. prisons, as president barack obama becomes the first sitting president to

So You want to be President? - By judith george illustrated by david small day 1 day 4 day 2 day 5 day 3 vocabulary

Unit 5: The Early Republic - . bell ringer: what characteristics make a good president? why. how important do you think

THE PRESIDENT - . warm – up – what is the most important role of the president of the united states? . wymk 1. what

UNIT 5: The President and the Executive Branch - . 1. the executive branch: executing the laws. what is the executive

Welcome! - . a special thank you to our sponsors:. dr. bob sanborn president and ceo children at risk mandi kimball

ICD-10 Changes Everything for HIM and the Revenue Cycle! - . presented by: day egusquiza, president ar systems, inc.